Mother Nature never ceases to amaze me: The more I try to learn the more there is to learn. At first sight the creeper looks like any other, but the buds & flowers are nothing like anything I have seen before. When I first saw it, I was mystified, I was staring at the buds/flowers & my niece was staring at me watching my reaction. I don’t know from where this ornamental plant originated from but found it very interesting and perhaps worth sharing.

The flowers are pretty with a striking reddish maroon colour with small little patches of white and have absolutely no odor. As the buds bloom, it looks so much like human organs (at least to my eyes) even to touch & texture…… creepy… my niece even say that she feels awkward to look at it & it brings creeps to her!!

In nature there are so many examples of nuts & fruits, vegetable which looks similar to human organs like the folds and wrinkle on walnuts which look like the brain, beans like kidney, crosswise slice a carrot in half and the cross section is like the pupil and iris, light bulb shape of an avocado looks like a uterus, stalks of celery like bone, lemons/grapefruit like breast, slice of tomato with the multiple chambers that resemble the structure of a heart, ginger like stomach, oblong sweet potato pancreas, clams bear a resemblance to testicles, etc. And strangely it is said that anything resembles the body part is good for that particular body organ!!!! What this plant is good for well I absolutely have no idea!! Someone told me about an old joke in biology: if you don’t know the answer to a question, it’s likely either “surface area or homeostasis.” Those two principles account for an amazing amount of what goes on in biological structures & processes!

To have a better opinion, when I showed the picture to my doctor friend she was tongue tied, I was told that the bud looks very similar to the anatomy of the male reproductive system. In actual organ picture shows…Testes, Epididymis & Vas deference. which is cut about half cm when vasectomy is done. 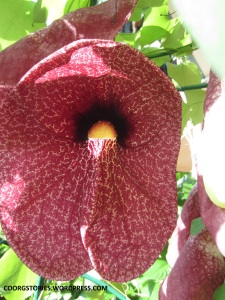 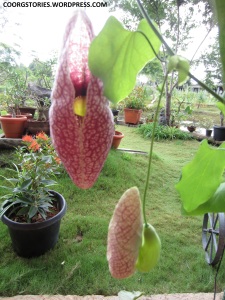 The half bloomed flower looks like the external part of the female reproductive system. Fully bloomed flower looks practically hollow from outside & petals looks saggy. Only an expert botanist can tell us how it works. Usually flower has so many parts like corolla, petals & inside both male & female reproductive stigma. The female stigma is generally single & the male stigma could be more than one, which produce pollen gains. And the female stigma after pollination becomes the fruit. You can see in the picture, the fruits developing from the swelling female stigma which is elongated.

Even though I was told that it is a pitcher plant, I am not really sure it is one. It looks different than the two types of pitcher plants known to me in my native place Kodagu. It does not really catch the insects & in-spite of me keeping close eye for almost ten days; I could find no pollinator also. Only once I saw a dragon fly sitting on it. Perhaps it is pollinated in night or may be self-pollinating??

Is this mother earth’s way of letting us know that basically we are not different from all the living beings? We may not be related but we can verily relate… All life force is made out of the same panchabutas (earth, water, fire, air & ether).Even though we are the pinnacle of the creation, we still go through birth, decay & death. Once dead everything becomes the part of same panchabutas. Death & birth are still mystery to us. Since almost all of us don’t know the real purpose of our life, basically we eat & produce no matter one is a pauper or royal or in modern-day terms the president or a celebrity or a terrorist!! That’s why birth is awaited & celebrated…. Hurrah….. The God in me is the God everywhere…. high time we all learn to respect the fellow creations & live in harmony.

This entry was posted in Uncategorized. Bookmark the permalink.

One thought on “An amazing creation: ‘pitchers’ can speak a thousand words!”