When I started off with my blog, even though I am very passionate about the things around me, I was apprehensive about my writing skill & how it will be received. But most of my friends, colleague & family encouraged me & continues to encourage me. When they find something interesting straightaway it ends up on my lap. My readers also have been very supportive & it reached four & a half thousand mark, its really motivational.

My best friend sent me this picture yesterday of two different kol-thenu (stick honey) so called because they build their hives on low lying straight branches of the shrubs/trees. It’s so very beautiful, truly a work of art… I always admire the engineering skills of Mr. & Mrs. Bees.

One is like a … oh it remind me of so many things… sawed teak log to monkey face to pizza to what not.. use your own imagination.

The second one is like the bottom half of India map.. what is eye catching is that in the first one you can see the gray coloured worker bee & the black dots are the head of the bees in the comb. You can see the pairs of eyes very clearly.

The third picture (close-up of second) you can see the blue colour of the bee baby just out in open… blue bee babies… I never saw anything like it before. You can also see the blue shade in the capped brood comb. Queen bee is supposed to be blue & by any chance if I get to photograph I will definitely share with you all!! I have heard of the mysterious blue & green coloured honey from Ribeauville in Alsace, North West of France gathered by the candy loving bees from the sugary waste of M&Ms. But I did not see blue honey bee babies before!! That too fully blue.. how coooolll.

This was found on my late friend Dr. Achaiah’s backyard, who was very passionate about the nature & its beings, so I have nick named it as “Achaiah’s blue baby bee”!! 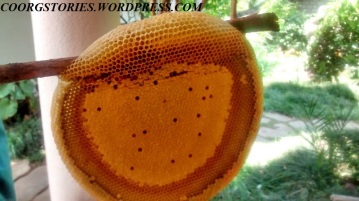 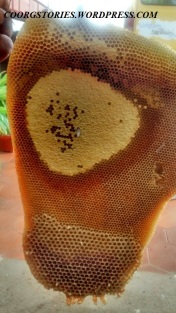 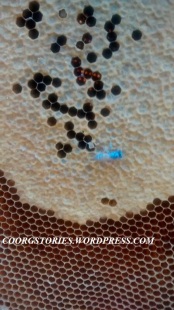 The cream coloured waxy substance in the h  ive is the Royal jelly (aka bee’s milk) secreted from the glands in the heads of worker bees, is the honey bee secretion that is used in the nutrition of larvae, as well as adult queens. However, it is fed to queen bee though out her live & to all larvae in the colony for the first three days, regardless whether they are destined to become drones (males), workers (sterile females), or queens (fertile females). It is also is the secret of queen bee’s longevity (4 – 5 years compared to one season for the workers). It is supposed to possess magical properties & used as a general health tonic, for fighting the effects of aging, & for boosting the immune system.

Dubai is one of the emirates or states in UAE(United Arab Emirates), in the Middle East which is portrayed larger than life… ever increasing in popularity as tourist destination, shopper’s paradise and foodies dream. A master piece in its own right, practically showcasing every cultures and nations of the world in a nutshell. It’s a place which does not have any natural resource, but has everything thanks to the futuristic ruler. The cleanliness is eye catching and the Burg Khalif stands tall as if policing the whole emirate. Never ending tide of tourists & visitors and, the weeked trip to Dubai mall, the largest mall in the world would remind one of factory workers milling out after the evening siren. I first passed through Dubai way back in 1991 on my way to Abu Dhabi. From then to now Dubai has come a long way…But not until this millennium my visits are becoming more frequent and stay are longer. What fascinated me more about Dubai than all the concrete structure is the ever increasing bird population and some insects like butterflies and bugs. Early morning Birds chirping in Middle East is music to my ears, against witnessing the ever dwindling bird population in South India. 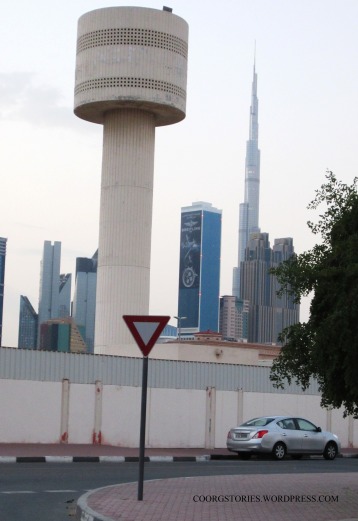 Raised in Western Ghats of India my fascination of Mother Nature is insatiable. I had three different experiences in 50 days and I want to share one of my most incredible experiences…

Paddy (rice) pollination is generally considered done by wind or self pollination. It always bothered me because my parents told me it’s done by bees. I always wanted to see the source of paddy pollination & I was not even sure if such small paddy flowers contained/hosted any nectar too. During the paddy flowering season there used to be a special kind of honey which is little darker and thick which was normally preserved for the home consumption. Unfortunately then unlike now I was more interested in eating than worrying about the source. Thanks to my granddaughter, during October – November 2013, I had the privilege of spending 50 straight days in Dubai. Every morning I spent more than an hour in the lawn with the new born acquiring free supply of vitamin D and getting rid of her jaundice. Now I will let my pictures tell you their own stories… taking these pictures were very, very tricky and I wish I was a better photographer and used professional camera… better luck next time… 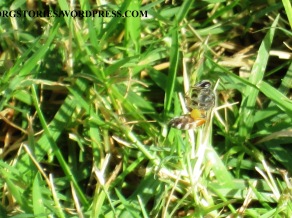 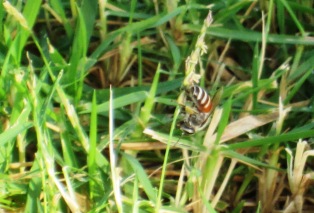 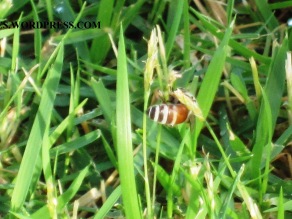 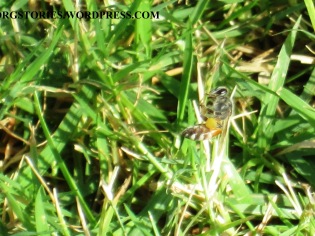 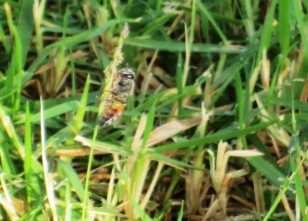 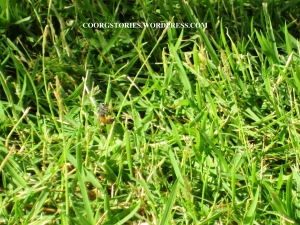 The bees often used to make me laugh… the grass stalk is so small and the flower are so tiny-tiny it’s like comparing elephant with a mouse. The bees coiled/wound around the stalk and sucked the nectar from flower. What an ingenious feat!! Then while unwinding most of then lost the balance and fell on the ground… its so funny like albatross running before taking off… my dear old Mother Nature never ceases to surprise me.

After my previous article on wild honey thought it would be appropriate to write about a real incident which my husband witnessed. It was in back in 1991. when we were refugees from Kuwait, and my husband was travelling from Madikeri to Virajpet in an open top Jeep. When he was nearing a small village called Kakotuparmbu, he noticed something on the side of the road ahead, a human like figure rolling/wriggling on the ground close to the road with what appeared to be a cloud over it. At first he thought someone must be drunk and sleeping….. or perhaps someone is sick. When he neared the person he wanted to stop and check to see if he could help..suddenly, he realized that the person on the ground was been attacked by swarm of thousands of wild bees, and he got scared because he was driving an open jeep and there was no where to hide if they were to attack him.

The person appeared to be an old tribal lady and was screaming in pain. The cry was heart wrenching. my husband looked at the back of the Jeep for a blanket or bed-sheet or any material that he could use to either shield himself as he went out, or to at least throw at her while he could go get help. If he got out he would be attacked by the angry bees too. A real catch 22 situation. There were no houses nearby. My husband, even though had all the intention of helping could not provide immediate assistance. Instead, he drove away into the next town and when he reached the nearest shop and sight of some people, he stopped and narrated them what was happening and requested if someone could come help. They did go back to help her but by then it was little late. They shifted her to the Virajpet hospital where she succumbed to the bee stings. It haunted him for a long time and he would wake up some times in the middle of the night… he would say any time I think of it or dream of it I feel like electricity pass through my body… I can still hear her cry… I wish I could help her in some way. May be there was something I could do.

Because someone was killed or attacked by the wild bees, we cannot brand the wild (or domesticated) bees to be bad killers. They attack only when they or their territory is disturbed. It can be a broken branch or someone or something trying to get the honey out. Sometimes the mischief mongers will throw stones and run away or easiest and the most effective disturbance is reflecting the sun light through mirror. For some obvious reason the bees gets real agitated. Most of the time it is children who do it for fun without realizing the consequences. Unfortunately the one who disturbed will run away but someone innocently walking nearby will pay the price like the tribal lady.

The place where the lady was attacked, there are many bee hives but not on burga tree but on wild jackfruit tree… perhaps a variety most of you have not heard of. In Coorg it is called “adina chakke” (the normal one is called chakke). It is much smaller in size which fits in the palm, almost the size of a bread fruit. It has small yellow fruit arils. And the seeds like a bird’s egg. The trees are too tall and unlike the other jackfruit the fruit does not grow on the stem but grows on top of the tree on canopy among the leaves. The arils are half the size of thumb. It is smooth and tastes sourish-sweet and you can put couple of arils in mouth at a time!! The fruit does not contain any sticky substance and all the arils are stuck to the center inedible rind of the fruit. When ripe or when the monkey or the birds eat them, the fruit or seed will fall to the ground. Fruit is seasonal. Inside the white jacket the seed has a slightly thicker coating. Unlike the normal jackfruit seed, when dry you can simply remove the coating and eat them raw. It tastes pretty good. Haven’t eaten hem in ages. Any time walking under the tree we would search for the seed and eat them. It is another kind of tree favourite to the wild honey bees. I will post the pictures of the tree later. The adinachakke is not deciduous and there are too many leaves on the canopy. So its little difficult to photograph the fruits.