The following article is a contribution from my Son:

I’m a big history buff, and have spent hundreds of hours pouring over facts and figures from Cahokia to Dwaraka, Alexander to Xerces and Hannibal to Rommel. I’ve replayed alternative histories, imagined ancient battles, and often found myself dreaming about discovering new civilizations or lost Incan gold!

But what recently blew my mind was my own piece of investigative history during my trip to India last December (2012). With all the excitement of an old Tintin story, spanning two cities, learning something new about Coorg (Kodava) History, to finding lost gold (yes GOLD), all in a span of 36 hours! Here’s my story….

During my cousin’s wedding, I overheard someone talking about how Coorgs have stopped sporting the once famous “Coorg Wildlife Society”* stickers on their vehicles, and were now moving towards what’s called the “Coorg Warrior” sticker. Apparently the Coorg wildlife society sticker was so widely available that everyone and anyone were sticking it on their cars and bikes. Additionally, you no longer had to join the society to get the sticker, so this also led to a slight drop in its use by actual Kodavas.

My Dad was gifted one of the warrior stickers by a cousin of mine, and when I was in Mysore, I got a chance to take a look at it as I was cleaning out my Dad’s car. The sticker depicted a common poise of a Kodava Warrior, taken from an old French or British picture of an ancient Kodava warrior brandishing an Odi Kathi (Fighting sword) above his head, and a musket/flintlock on his other hand. I say ancient because of the particular way in which he wears his traditional attire: Coorgs today wear their traditional black woolen Kupiya, tailored to a modern fit, with a white and gold turban, a red and gold ornate silk sash (Chaele) that wraps tightly around their waists, and a ceremonial dagger, the Peche Kathi tucked into the sash. The kupiya is worn over either a modern shirt/pant/tie combination or over a kurtha pyjama.

However, if you look at the Warrior’s attire,  you’ll notice how it’s fitting to his martial needs. He wears a cloth around his head, his kupiya is free flowing, and not rigid like the woolen ones of today, and he wears nothing on this legs and feet. His Cheale appears to merely be a cloth wrapped around his waist. Even the peeche kathi appears to be purpose built as a weapon and less of a ceremonial blade.

The sticker also had the following words on the bottom, “Coorg Warrior 1839”. Now that year really got me hooked and my mom suggested I find out what the significance of that date is. That night, a bit of wordsmithing and googling later, this is what I found:

a)      There was no particular significance of the date 1839 in Coorg history pertaining to that medal. Let me know if you know otherwise**

b)      There was however, significance to 1837, when it is recorded in multiple publications and sites that a Coorg Medal was issued by the British Government to some Kodavas for their loyalty to the British during an uprising in Canara, Karnataka in April of 1837.

c)       The reverse of the medal is the Coorg coat of arms (sans the rifle that is in the coat of arms used today). This coat of arms contains the Odi and Peeche Kathi, and also included the “thodanga”, which is girdle used to hold the Odi Kathi at the back of the warriors waist. A laurel wreath surrounds all of them, and an English inscription surrounds the wreath “For distinguished conduct and loyalty to the British Government. Coorg, April 1837”

d)      On the front of the medal, I found what I was looking for: The Coorg Warrior. The medal, unlike the sticker, afforded the opportunity to build depth the warrior, and so I could clearly make out the warriors face, well defined calf and pectoral muscles, his rifle, the free flowing Kupiya, the dagger in his Chale.

I was quite stumped: mainly because of my own (and I suspect most Coorgs) lack of knowledge in the origins of the Coorg warrior pose. Here I had found we were not only citing the date wrong, but more so, we were using a something that the British created as a symbol of our warrior history!

Now, I’m not going to get into the obvious arguments of our allegiances, what were we doing helping the British when we should have been fighting to keep them out, etc etc etc. India in 1839 did not exist as a country, and we were really 500 states (or countries even) that either paid tribute to or were ruled over by the British Crown. The concept of the entire region being a country is quite debatable, so let’s save that for another time or offline. For now, treat this as a story of what happened: pure facts.

Anyway, the next morning, off we went to Coorg for my final trip there before I had to come back to the US. That afternoon, I found myself sitting with my close uncle and aunt (I them Papa and Mama) and the conversation obviously drifted into this exciting story that I told them. How we were using a British sign of loyalty to depict our warrior backgrounds, etc. The whole time I told the story, I noticed a growing gleam in my Papa’s eyes, his lips and manner itching to butt into my story, until finally; he said “no you’re wrong; the medal was given by the Maharaja of Coorg, to certain people for their bravery. We have one of those medals, and I can show it to you!”He instructs his daughter to get the special medal from the safe, and I thought he was kidding. But lo and behold, she appears with this: 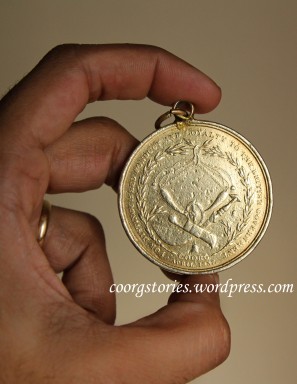 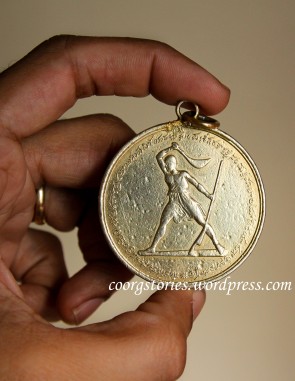 Goosebumps, flashbacks, everything came pouring out as I took the medal in my hands. I just couldn’t believe I was holding a piece of history so close to my people, right in my hands, a mere 24 hours after I first began my search for an answer! After much observation and translating, we confirmed that it was indeed given by the British and not the Maharaja, and we spent the next hour or so refreshing our memories and getting our history right!

*Coorgs, traditionally bound by geography and family ties to Coorg, have spread out of their homeland over the last few decades, moving into Mysore, Bangalore and beyond. Fiercely connected to their identity, we would look for ways to identify ourselves when we were out driving around in these cities. Now, wearing a Kupiya and riding your motorcycle is not for everyone, but most of us would stick the Coorg Wildlife sticker our Motorcycles and Cars. I had one on my bike’s petrol tank, and most cars have it at the rear windshields or on the boot(trunk) of the car.

** It’s possible that strict British industrial age policy of making goods in the British homeland necessitated the medal being produced and shipped from the UK. This could mean that they were probably distributed in 1839 for the actions of 1837.  However, that’s my interpretation. The real person to know for sure is the one who printed the sticker for the first time:-D