Witnessing both the side of the process of creation with naked eye…. 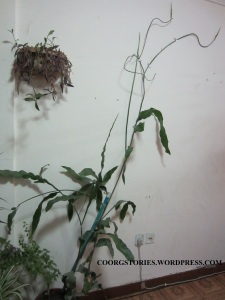 We called it the Midnight flower, and I saw the flower for the first time when I was in middle school. The fine silky texture of the spotless white petals almost gave an illusion of transparency. We had a vine in the pot for quite some time which grew from a small shoot to a tall lanky-gangly stemmed plant & one fine day it had many light carmine red buds formed along the edge of the leaf-like stem . The plant usually begins to set flower buds in July through September & it can be just a single one or as much as the leaf can accommodate. My mother, an avid gardener had managed to get a small cutting from somewhere. Since we saw it for the first time, as kids we used to wonder what is going to pop out of it. We watched it daily to gauge when it will bloom. Then the small little buds became bigger, swelling up dramatically in its shiny reddish shade.. so we still waited wondering if it was red flower or what… then Mum, in her colourful enthusiastic way, explained to us that it was going to be a beautiful, out of ordinary white flower with carmine red coloured outer petals the size of a dinner plate but only one problem we have to wait for it to bloom at night… as it is a midnight bloomer & the full flower will open only at midnight. by morning it will die… we could not understand the logic.

The nocturnal bloom concept was new to us. We knew of the fragrant parijatha (Nycanthes arbortrisis with small flower with snow-white petals & a orange-red pipe stalk) which opened in the evening.. with the full bloom at night & fall down in the morning, but it still would be opened & the scent would be still there for us to see and smell. Moreover in the evening its half opened too. So what is so different about this flower? This easy to grow, fast growing tropical plantdid not appeared capable of producing such stunning breath takingly beautiful blossom!! Even by appearance the stem does not look having the capacity to hold a single flower of such large dimension let alone FIVE or more at one go.

Finally the day came & we got the pot inside the living room so we can enjoy it as long as we wanted… my mother’s enthusiasm was contagious & even my dad was a willing partner in the whole drama. Even some of our neighbours were there! Telephones were not common & we were the ever ready message carriers about the imminent D-Day blossom!

It started opening up filling the room with fragrance. The buds began to open around 8 or 9 pm… (And be wide open by midnight). What a sight…. Luckily not one or two but five bloomed that day… When they are ready to open, they do so in dramatic fashion, literally before your eyes – you can practically see the movement of the flower. As if the whole process of birth & death is enacted right before your own naked eye in just one-third of a day!! A divine spiritual experience, believe me it’s worth witnessing the large (about 11 inches long & 5 inches wide), funnel-shaped, white flowers at least once in your life & it is worth losing a little sleep.. Perhaps that’s why people call it Brahma Kamala named after the creator. Everyone was spellbound & calling everyone around sharing the joy – come & see or did you see this & that. It was as if a new baby had arrived at home… & we all even took torch & try to look inside…. And I refused to go to bed without seeing the full bloom only to fall asleep on sofa… morning when I woke up the flower had already closed… making me so very sad… Mum said she tried several times to wake me but I would not budge… it was an electrifying moment.. as if the time stood still & seemed like the full moon had appeared in our living room… I cried my heart out. 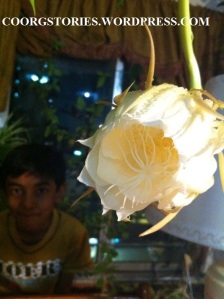 Each bloom lasts only for one night & by sunrise the flower is spent. So I had no choice but to wait for the next one. Back in those days, we all were very active children & there was no TV & the longer we were awake mother would make us study more. So we all learnt from small age to sleep early… hence I could not keep my eyes opened!! . We did see it again, but the enthusiasm & the magic was not the same as the first time…. Something like the first kiss! We children were the happiest because we would also get sweets/chaklis or something to eat too. The blooms appear intermittently during the summer months. Some plants bloom every year, while others have an alternate blooming cycle.. However, for years we continued the practice of waiting for it to bloom with the torch & sharing the joy! Eventually grew out of it like a child out of toy, becoming midnight flower Sanyasin!

A colleague of mine from Rathnagiri (Alphonso land) told me when they were little boys they knew the unique qualities of the flower & would say, if anyone can manage to put a flower in a case with a currency note or gold or diamond, the box would be filled with multiple of the same on its own… in other words sheer magical. I am sure there on too many different experiences around.

Years later in July 2013, the same drama was enacted far away from India at my neighbor Shruthi Cariappa’s house. Unfortunately I could not re-live the nostalgic memory as I was on vacation. Many of their friends were invited & there was dinner later it seems… a photo was posted on the facebook too. Many of the pictures posted here are from them. The timing is shown earlier my guess is that perhaps the plant brought from India has its biological clock set to Indian timing!!

There is also supposed to be another similar flower (selenicereus) in pulish-pinkish magenta. I never had the previlage of meeting…the pretty lady. 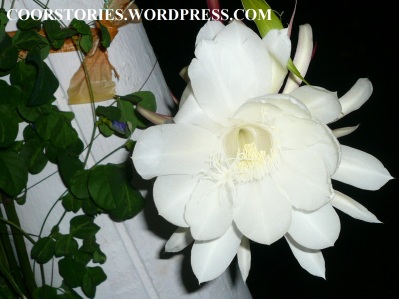 Details on the flower, the plant, and growing it:  Epiphyllum oxypetalum (DC.) Haw. Commonly known as midnight flower, Dutchman’s-Pipe Cactus, Queen of the Night, Orchid Cactus, Jungle Cactus, Night Blooming Cactus, Night Blooming Cereus. In Kerala it is called Ananthasayanam or Nishagandhi flower. Ananthasayanam – infinite bed/seat – where Vishnu is sleeping on the Aadishesha, the thousand headed snake floating in the ocean of milk & the hood of Adishesha shielding the Lord. I was told by colleague that in Kerala this flower is considered sacred & this rare bloomer is usually welcomed by lighting a lamp. As it blooms in the evening, people consider it as a divine visit.. As the divine personality of God would visit us by a whisper of air or a butterfly touch, this flower blooms with an unusual divine fragrance around midnight& shuts off by morning. The inner core of the bud has the shape of a sleeping Sree Ananthapadmanabha (Maha Vishnu). Traditionally it is believed that menstruating ladies & non-veg eaters are not supposed to touch the plant. And it is said to bring good luck & wealth (lucky bamboo & money plant has a competitor!!)

It is supposed to be a tropical orchid cactus native to Central & Northern South America but it has been cultivated all over the world perhaps because it is unique. It’s an erect/semi-erect, branching cactus, can grow up to 20 feet tall with cylindrical stems bearing elliptic, leaf-like, scalloped, dark green stem/branches. These plants are very easy to grow even as a houseplant. Simply place each leaf cutting (roughly two to four inches in length) – cut end down (can root either way) vertically into some well-draining sandy potting soil. Pack the soil tightly around the leaf to remove any air pockets & make sure the whole bottom of the leaf has good contact with the soil. It should be rooted with three to six weeks. Root-bound plants tend to bloom better, so don’t repot your plant very often. Since it is a cactus water sparingly but regularly & make sure not to allow water to stand as it will rot. The soil should be allowed to dry between watering. Like vanilla if you stress the plant a bit, the flowers are better & bigger in size but quantity will be less. (But you should know what exactly you are doing). It will usually take two to three years before you have a plant that begins blooming. The plants are supposed to bear small, 4 inches long, oblong, purplish-red, angled edible fruits very similar to the pitaya or dragon fruit. But I never saw any in our plants at home or at our neighbours may be because the cooler weather condition or a particular species of pollinator required like vanilla which was absent or there was no chance of pollination as we always took the plant inside the house.