The confusion about the origin of name “Kodagu” itself is as colourful as the origin of the Kodavas & draws lot of curiosity… The name Kodagu is anglicized as Coorg… and I am sure the Britishers must have found it difficult to pronounce Kodagu… Between the confusion people refer to us as Coorgis… to make it clear we are not Coorgis or murgis, we are “Kodavas from Kodagu & speak Kodava takk” blessed children of our dear Mother Kaveramme.

Origin of the name Kodagu is brushed with different strokes & hues by different individuals. As the Indian culture is based on Guru-Shishya Parampara & the legends are passed orally, somewhere it must have got twisted. Many quote the reference in Kaveri Purana as the source & unfortunately my knowledge of Sanskrit is very limited. Hence I really don’t know which version is right which make me support the Kodava Culture & Legends which I am a part of. The only common thread is that Prince Chandravarma & his celestial wife were Kodava ancestors.. To quote few:

The Saga begins with the arrival of Chandravarma, the pious & brave Prince of Mastya Desha, in ancient Kodagu (supposed to be known as Brahma-Kshetra), seeking adventure & solace. After the marriage he settled down in South permanently with his queen of celestial origin. As the family grew larger the need for food grains increased & with that the requirement of cultivable land. So the brave grandchildren of Chandravarma leveled the hills for cultivation with their bare hands, like the wild boars dig up mounds for their sustenance. Hence the land came to be known as Kroda Desa (Sanskrit word Kroda means hog) & eventually Kodagu.

Some go one step further… all the grandchildren were mighty men of valour, strong of arm & foot. Their nails resembled the fangs of boars. WOW Celestial Mother & a Royal Father & children had fangs… how cool is that!! Running short of basic food supply & sleeping quarters, with the nails of their strong hands & feet, they tore up the ground & levelled the slopes of the hills with the valleys in a circumference of five-yojanas (60 miles). So much accuracy!! Then they settled themselves anew in the country, the face of which they had changed by the strength of their own arms. What a sight it must have made…

Another version … When Lord Vishnu returned to Vaikuntha (abode of Lord Vishnu) after killing Hiranyaksha in Varaha (boar) form, on the way Lord Vishnu tore out the fangs & threw it which fell in Kodagu thus getting the name Kroda-Desa.

It is also said that the word Kodagu is derived from the word Kudu, which means Hilly place but not sure in which language though!!

The most interesting aspect of my years of personal observation is that one too many people who comes to Kodagu or hears about the culture wants a piece of the pie & want to be part of the distinctive Kodava culture. And on the way they want to leave a mark & start to come up with their own version of certain things… for example Kachumpuli is the vinegar prepared from the fruit extract of Panapuli (a species of garcinia), indigenous to Western Ghats. But someone with half knowledge of Kodava culture writes Kachumpuli as the fruit. Similarly karik-muripa* (cutting the vegetables) is a part of oorukuduva ceremony but someone writes it as a first day of the wedding ceremony!

But what surprised me most was my experience in Kuwait. More than two decades ago I happened to see a booklet in Indian embassy regarding Coorg, when I went for some official work. In that there was a couple’s picture with their back towards the viewer where the bride was wearing the usual style saree & the groom was wearing white dhoti, white shirt & a Mysore style Peta (turban). I am sure a copy is available in their achieve!!

But Mrs. Amabssador (I don’t remember which year though) took the cake. One day Mrs.Rangaswamy (her husband Mr. H.V. Rangaswamy was the MD of Kuwait India Exchange in mid 90s), an acquaintance of ours called me & said if you don’t mind can I ask you something? I said go ahead.. hesitantly she asked me don’t you all wear blouses back home when you wear Kodava saree? I laughed & said what made you ask such a strange question? In fact my grandmother’s generation even wore jacket (long sleeved relatively longer bodied blouses) & even wore close collared to go with it too. These days only brides wear jacket as part of culture. For that she said she went for a fashion show at the embassy & Kodava saree was part of it. They wore the saree so awkwardly & also the so called model did not wear a blouse. It was rather poor tasted & really looked bad. Since I have seen you wearing the saree at the functions & I know how elegant it is, I asked why they wore like that? For that I was told that Mrs. Ambassador had done research & that’s what she found… Oh boy… God knows where she did her research in Timbuktu or Sahara Desert!! It was the worst case scenario.. I was angry & sorry for that half-knowledge lady at the same time. But what could I do? After all she was Mrs. Ambassador & represents our beloved country… hope she did not do any more fashion shows in other parts of the world!! In a decade or so with the help from Google-mama, future generation sadly will start believing in such quotes including the Kodava kids raised outside Kodagu.

* It is the gathering of women folks – close relatives & from the village – around round tables to assist the cooks by cutting vegetable & rolling kadumbuttu. It guarantees the quality of chopped vegetable as well as the kadambuttu. A gathering looked forward by women as it gave the chance to meet the cousins, exchange recipe & news, talk about latest fashion, & catch up on gossips, etc. sadly now everyone uses the catering services. Thanks to Kodava men, at Kodava weddings, women usually dress up well, meet everyone, be happy, look good & do not cook or chop meat. You can read more about it when I write about the Kodava wedding.

What happens when a Civet cat (paradoxurus hermaphrodites) eats coffee beans for dinner, and poop’s it out before breakfast? I’ll tell you what: The worlds finest gourmet coffee that’s both expensive and rare!

Well you heard it right… it’s no joke… indeed this top shelf coffee derived from excreta can cost above 600 US dollars per pound! Hard to believe the most expensive coffee in the world comes from one of Coorg’s wild felines, the Palm civet’s poop (Punugina Bekku in Kodava dialect – aka Pane-poonjhee or the ‘toddy tree cat’). It’s a dark brown tree-dwelling weasel-like creature about the size of a housecat. It sports a pointed muzzle, with round brown eye and dark long tail and is actually found throughout Southeast Asia. It is said that they eat only the perfectly ripe seeds & the acid treatment in their digestive system practically cooks the beans giving the seeds that sought after taste. I cannot confirm it because I have not tasted it, and neither do I plan to either 🙂 So now you know how the taste buds of the world’s rich folk work. The chief diet of the Civet cat is not coffee however, and its staple food is the fruit of the wild fig tree and sago palm. 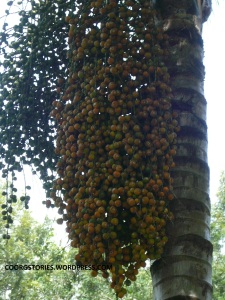 Growing up, the Civet used to be very common all over Coorg and I have vivid picture of it, but haven’t seen one in ages. Years ago I memeber having seen the Civet poo coffee seed on some big rocks beside the creek. My late father told me it came from the Pane-poonjhee’s stomach. He would say “Alli pokate kunji kakka undu” (don’t go that side child there is shit). In fact the poo did not look like poo at all. Vividly I remember that it was few whole coffee seeds stuck together with little dried up liquid. Dad would say these creatures come to eat the coffee berries in the night… such a nuisance!

Between the skin & seed of the coffee berry, there is a very, very thin layer of sweet liquid. It’s so thin you can barely enjoy it. I know it because sometime I would put ripe berries also in my mouth, but I never ate it though!! Looking back I wonder how I did not end up eating any poisonous berry as I ate any sweet fruit I could lay my hand on! We never knew the importance of the poop coffee seed & also for me, kakka is kakka no matter who shits it. Hahahahaha!

In this ever shrinking animal & plant world, it’s hard to find the civet coffee seeds in nature. However in some countries like Indonesia civets are farmed for this purpose. A strange thought is passing through my mind… just imagine instead of civet poo if it was pandi (Pig) pooo… oh… boy how much money we Coorgs could make!

Note: Similar to the civet is the black jungle-cat (kabbekku). In Kodagu the kabbekku meat was a delicacy, so it was hunted at night, now it’s almost extinct… Wonder if it has a fairer cousin?